The very best trade show games are those that are different and persistent. You need ideas for games that will help your business stand out and get noticed at a convention, consumer show or trade show. Some of the best marketers know how powerful games can be at expos.

In a very real sense, most of us are hardwired to notice games and are excited to participate or watch–and more importantly, share their experience with others. Also, notice the keyword, “excited” in that last sentence. You are attending a trade show to get people’s attention and get them excited about buying your products or services.

This is why incorporating game ideas for trade shows could be a fantastic way to create some buzz (other than, of course, your trade show booth). Trade show booth rentals are a great option for this reason- so that you can keep your brand image up to date without the added expense, or, for maximum impact that is exactly to your specifications, consider a custom trade show booth.

Now that you understand the strategy behind trade show games, here are a few ideas for your next event.

The prize putt is a great game that doesn’t take too much skill if you buy the right style. Ones that are more luck than skill tend to get a lot more people to play. Give it a shot, this trade show game gets a lot of booth traffic. If done right, it may just get you some leads too.

One of the more unique ideas that we’ve seen is the Matching Contest. This game works by offering stickers for visitors to wear on the front of their clothing. These stickers would be printed with a number, symbol, or the like, of which two of every variation of stickers would match. The contest requires attendees to find their match at the show and come back together to your exhibit to win a prize (this is worthy of a larger prize, like an iPad or $500 gift card).

Of course, with the stickers also showcasing your logo, it’s huge brand visibility play. It’s an opportunity for attendees to ask, “Hey, what’s that sticker you have that everyone is wearing?”

Can people see others associating themselves with your product or service? If you get enough people to play the game, you extend the visibility of your brand to various parts of the show.

Social media channels are limitless in their use for trade show visibility and gaming.

One customer of ours used a large flat screen to show all the latest tweets with specific hashtags on Twitter. Next, they had attendees tweet at them using that hashtag (#companyxcontest), selecting one lucky user every hour the show floor was open to collect a prize.

The company would then tweet back notifying the attendee of the win. #Score.

As some know, all tweets that include your specified hashtag gets its own folder in Twitter, where all of those tweets can be viewed in one place. A great way to measure your marketing efforts quantitatively.

There are a few people who may be at a conference because their boss told them to go and they are just looking for a fun time. They might not be the best people to do business with, but they could help you attract people to your exhibit. Attendees are likely to stop to see a booth with a lot of people and action.

Choose a fun game that will be universally appreciated by both genders, and keep track of the high score of that game. If someone beats the high score, offer a prize and update the score.

Again, the more social the game the better. The more people that can play at one time–the more buzz you will generate.

Some companies integrate a prize wheel into their display area. Does this work? Yes, a prize wheel works because it is eye-catching and well known–and the lure of “free stuff” is addictive, and works across genders, generations and pocketbooks.

The prize wheel could serve as the simplest and effective icebreakers all the event game ideas.

Making a game out of getting free stuff should incorporate some competition. If you give the opportunity to win small and big prizes, it turns into a competition. Not only are you getting something free, but you want to try and win big.

Prospects can spin the wheel if they give you a business card. You can then give them promotional giveaways or even coupons. If you use this trade show game idea, make sure it is accessible. A friendly staff member should stand in front of it and invite people to participate.

Far more people will participate if someone asks them to spin the wheel. It’s common nature to be on the edge of wanting to participate in a game, and sometimes you just need that extra push.

Role Doubles, Get a Prize

Prize games are the best, as long as it’s a great prize. Rolling doubles is an easy concept and quick. People would be interested in this because it won’t waste a lot of time, but it’s a great conversation starter and you can grab their contact info in the process.

This is one of the more common ideas used at trade shows, although it can be very effective. It gives people the opportunity to show off their knowledge in front of their colleagues.

If you first focus on giving that person a moment of glory, they usually then give you the courtesy of some attention to what you and your company provide.

Placing the trade show attendees’ interests first can always open the conversation up in a way that’s less aggressive. If they answer a tough question correct, and then get rewarded with a prize…you may have just made their day. That is then associated with your brand.

Just give us your information, get a prize. We’ve all seen this before. Using this idea is as simple as getting trade show attendees to drop their business cards into a fishbowl and then draw prizes. This approach may be simple but it can also be highly effective for getting attendee information!

If the event is filled to the brim with your target audience, your goal should be to get as many attendee information as possible. This trade show game strategy could be the one for you. 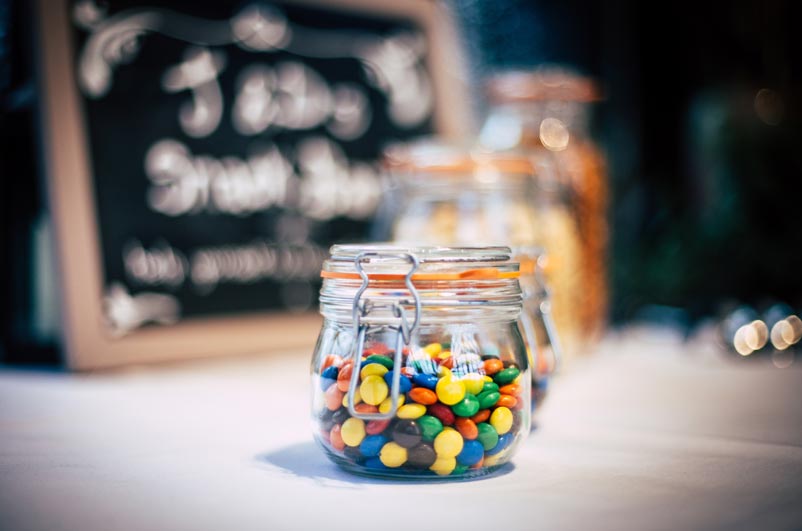 Another game idea is to have a container with a certain number of objects, like candy or marbles. The person who comes closest to guessing the amount gets a prize or a discount.

Like other games, it can serve as an ice-breaker that can foster communication between your representatives and trade show attendees. It’s a great way to get their information as well so that you can contact them if they won at the end of the show.

This is yet another example of a simple and effective way to get information from your target audience.

Ah, yes of course! Plinko is a classic game that always brings a nostalgic fun to the trade show floor. Have someone fill out a contact form for a chance to win a prize. Make the prizes something fun–but useful.

Most people are very familiar with cornhole.

Since it doesn’t require a large amount of talent, attendees will be willing to step up to give it a shot.

Plus, branding the cornhole board is very impactful and the process couldn’t be easier.

Using one or a combination of these ideas will help you gather information in a way that’s fun for the visitor. However, the success of the game is not all up to the game itself.

Games attract people who walk right past your booth. You cannot do this without a good first impression.

As always, make sure your booth is naturally eye-catching and has a great design to get the attention of attendees that are far away from your booth. Your game is not the first impression someone has of your brand–your display and your brand imagery is what catches their eye and attracts them to your booth.

We see a lot of exhibitors believe their game choice was the problem when in reality their booth was not a good representation of their brand, which in turn affects their booth traffic.

Remember the most important thing you can do at a trade show is attract visitors, meet people, collect their information, and cultivate a positive relationship. Good luck with your game choice and always remember to cater your trade show booth’s marketing strategy to your audience. Create a goal that can be measured (eg., the number of booth visitors, number of visitors who supplied contact information, etc.) to determine your game’s success.

Whether this is your first rodeo or your hundredth, Metro Exhibits is your trade show partner, designing, fabricating and renting the industry’s premier trade show booths and providing a full array of wrap-around tradeshow services. Contact us for more information!

Want to gain an edge? Get ideas, tips, and
resources from the exhibit industry's top experts.

What To Expect at the Consumer Electronics Show (CES)

The Logistics of Preparing for International Trade Shows

Top Pre-Show Tips For a Tradeshow

What To Expect at the Consumer Electronics Show (CES)

The Consumer Electronics Show (CES) is called the “world’s largest and most influential ...

The Logistics of Preparing for International Trade Shows

According to the US Census Bureau, there are 28 million registered businesses in the country. That&#...

Top Pre-Show Tips For a Tradeshow

Trade shows provide an instrumental number of benefits for a business. It affords a terrific opportu...

Read more
We Handle All Your Trade Show Exhibit Needs: From a Single 10x10 Booth to a Full Pavilion

Welcome to the MetroPlus client portal.